In my recent article about the Apple stock split, I used Wal-Mart Stores Inc. (NYSE: WMT) as an example of the type of successful company that issues stock splits. In fact, Walmart issued nine stock splits between 1971 and 1999! Thinking about Walmart’s long-term track record of consistent performance got me wondering about how the worldwide retail leader compares to online retail juggernaut Amazon.com Inc. (NASDAQ: AMZN). Retail has been transitioning more and more to the online realm over the past decade, so does that mean it’s time to sell Walmart and buy Amazon?

Tale of the tape
Comparisons of any retail stocks should always begin with one of the classic valuation metrics: P/E ratio. A chart of the share prices of the two companies shows that Walmart’s share price has gained a respectable 41% over the past ten years, while Amazon’s share price has ballooned 515% during the decade! 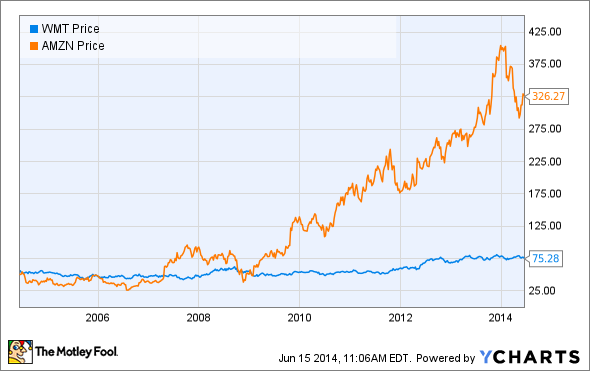 And that price explosion is how the Amazon vs. Walmart battle gets off to a puzzling start. Walmart’s P/E ratio of 15.6 is a typical, reasonable multiple for a large retail company. However, Amazon’s P/E ratio has now grown to a bloated 509.8!

So what is it about Amazon that has investors overlooking such an egregious P/E ratio? First, Amazon has a strong following of people who believe in the company. There is no other company that is identical to Amazon, but Walmart sells much of the same stuff online.  If you ask the average person on the street which stock is a better buy between the two, they would likely tell you Amazon is and give reasons such as “Amazon is expanding so fast” or “Amazon is the future and Walmart is the past” or “Are you kidding? I use Amazon all the time!”

Amazon’s incredible growth
So let’s take a look at Amazon’s “rapid expansion” vs Walmart’s. Is growth the reason Amazon’s stock is so much more expensive than Walmart’s? Amazon’s 5-year projected annual earnings growth rate is an astounding 46.6% compared to Walmart’s meager 7.9% growth rate! That is a huge difference, but if you compare the PEG ratios of the two companies, Amazon’s is still a whopping 11.0 compared to Walmart’s 2.0. So growth rate is not the only reason Amazon is so expensive.

Changing of the guard?
So could the difference be that Amazon is the future of retail and Walmart is a thing of the past? I remember hearing that the iPhone was “the past” and that Android was “the future” last year when pre-split Apple was trading in the low $400’s. That argument never made much sense to me. It seems to me that the way to tell if something is a thing of the past is to look for a negative growth rate. For example, I would consider a newspaper such as the New York Times to be a thing of the past, and its 5-year projected annual EPS growth rate of -5.8% seems to support that belief. But Apple is projected to continue to grow its earnings in the foreseeable future at a rate of about 15% annually, and that’s one of many reasons that Apple’s share price is up over 50% in the past year. Clearly Amazon’s growth rate dwarfs Walmart’s, but Walmart isn’t going away. In fact, in addition to its projected earnings growth, Walmart expects to open 115 supercenters and 120-150 new smaller stores by the end of 2014.

The Amazon party
So growth is not the reason Amazon’s stock is so much more expensive than Walmart’s, and Walmart is not riding into the sunset anytime soon, so is there something in the popularity of the companies that makes a difference? While the answer to this question should be “no,” often times the popularity or public perception of a company is one of the most important factors when it comes to its share price. Boring ole Walmart has been around for decades making the same ole boring $20 billion annual profit. Talk about a snooze fest… Amazon, on the other hand, is the new and exciting company! So what if its annual earnings are only $0.5 billion; all the cool kids use Amazon! Does your girlfriend care how ridiculously expensive those Tiffany earrings are when she wants to impress her friends? Of course not! And sometimes traders get so excited about a company that they don’t care how expensive the shares are getting, as long as they don’t feel left out of the party.

In my book, I call these stocks “trendy” stocks, because they remind me a lot of fads in fashion and pop culture:

…do not make the mistake of equating excitement or popularity with value. One of the all-time great examples of the popularity-equals-value fallacy is Facebook. By the time Facebook went public in 2012, it had nearly 850 million active users. You can’t get much more popular than a business with 850 million customers… In addition to the popularity of the product and the familiarity most viewers had with Facebook, the business networks hyped the Facebook IPO as the biggest thing since sliced bread. For weeks prior to the IPO date, the Facebook IPO was discussed seemingly every hour on CNBC. “Experts” weighed in on both sides of the argument, but the consensus seemed to be that this was going to be a once-in-a-lifetime opportunity. If nothing else, the Facebook IPO was going to be a historic event in Wall Street history, and CNBC wanted you to be right in the middle of it. Of course, everyone knows the story of what happened to the shares of FB in the months after the IPO. For those of you who don’t know, I’d first like to take a minute to welcome you to our planet. We call her “Earth.” I don’t know why she is a female because she seems to have as many peaks as she does valleys, as well as a huge magnetic pole.  But back to my point: Facebook shares tanked. The IPO price was $38, and within a couple of months the shares were trading below $20. Just because a stock is popular doesn’t mean it is a good investment. But it does mean that it’s a good topic of discussion on TV.

And the winner is…
I would argue that, with a PEG ratio of 11, the excitement surrounding Amazon is the type of “irrational exuberance” that Nobel laureate Robert Shiller describes that occurs during market bubbles. Others would argue that, at $326 per share, Amazon is worth every penny and will eventually justify the high share price years down the road. Each trade in the stock market is based on a difference of opinion between one buyer and one seller. Unfortunately, it might be months or years until each knows who was right and who was wrong. Walmart is certainly not a company that is very exciting, but consistently making money in the stock market over times is sometimes a boring process. With the S&P 500 making new all-time highs seemingly on a weekly basis, I would be very leery of stocks with extremely high multiples such as Amazon.

Did you get burned on the Facebook IPO because you were watching too much CNBC?  Or maybe you just want to be able to look sophisticated in front of your coworkers when they ask you what you are reading on your Kindle, and you’d prefer to tell them “Oh, I’m just reading a book about stock market analysis,” rather than the usual “Oh, I’m just looking at pics of my ex-girlfriend on Facebook.” There’s a whole chapter in my book about why TV analysts and other so-called experts aren’t nearly as reliable as you probably think. For these reasons and more, check out my book, Beating Wall Street with Common Sense. I don’t have a degree in finance; I have a degree in neuroscience. You don’t have to predict what stocks will do if you can predict what traders will do and be one step ahead of them. I made a 400% return in the stock market over five years using only basic principles of psychology and common sense. Beating Wall Street with Common Sense is now available on Amazon, and tradingcommonsense.com is always available on your local internet!