In the past two days, President-elect Donald Trump has used some unsettling rhetoric related to global nuclear proliferation. On Thursday, Trump tweeted the following message to his followers:

“The United States must greatly strengthen and expand its nuclear capacity until such time as the world comes to its senses regarding nukes.”

‘Let There Be An Arms Race’

When asked to clarify the statement on CBNC Friday morning, Trump ramped up his rhetoric.

“Let there be an arms race. We will outmatch them at every pass and outlast them all,” Trump said.

As Russian president Vladimir Putin pointed out on Friday, Trump called for boosting U.S. nuclear capacity throughout the campaign season.

“Of course, the U.S. has more missiles, submarines and aircraft carriers, but what we say is that we are stronger than any aggressor, and this is the case,” Putin said in response.

However, many Americans are uneasy with the idea of escalating global nuclear tensions.

Donald Trump may have provided the best succinct argument against a global nuclear arms race back in 2014. 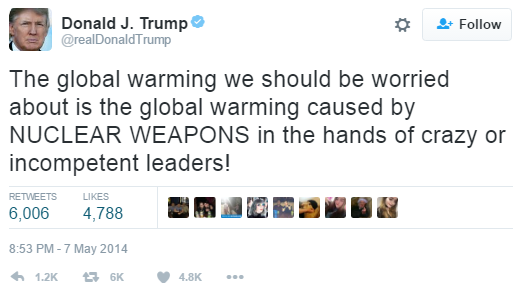 Of course, subjective interpretations of the words “crazy” and “incompetent” are…