In a recent report, Morgan Stanley analysts gave their updated take on the outlook for crude oil. Analysts discussed their views on the current price environment and the economics moving forward.

Analysts believe that volatility will be the major story for crude oil in 2015. In just two months so far this year, shares of the United States Oil Fund ETF USO 1.58% have fallen by nearly 20 percent from around $20 to as low as $16.30 and then rebounded nearly 25 percent to as high as $20.29. Analysts expect much more of this type of volatility for oil investors in upcoming months. 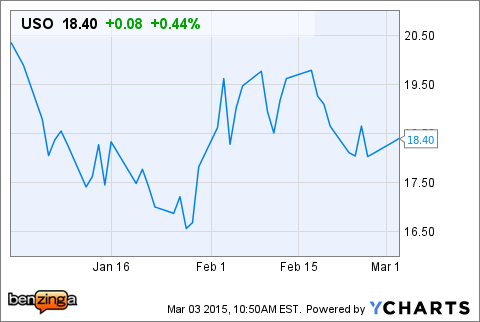 Temporary boosts to U.S. crude prices could come periodically due to headlines about falling rig counts, capex reduction or a weaker dollar, but analysts believe that any spikes in price will be short-lived in the near term.

The only scenarios in which analysts see a sustainable turn in the market any time soon would be via OPEC capitulation or a large global outage.

Analyst believe that a slowing of U.S. production growth will be led by unconventional production, which will be the quickest to react to lower prices. Larger, more complex international projects could see a more delayed production response.

Analyst forecast 0.7 million barrel per day (mmb/d) non-OPEC supply growth in 2015, down 50 percent from 2014. Although they note the possibility that OPEC could still intervene with a policy change, analysts forecast a 0.6 mmb/d increase in OPEC production for the year.