It’s not often that news of a 48.6 percent year-over-year drop in revenue will have little effect on stocks, but that’s the case for stocks of Macau casino operators today. According to data

released by the Macao Gaming Inspection and Coordination Bureau, gaming revenue in the month of February, including the Chinese New Year, fell by nearly 50 percent from February 2014.

Is February Rock Bottom For Macau?

February marks the eighth consecutive month of negative gaming revenue growth in Macau, but there is hope for investors that February could mark a turning point for the space. February marked the high point for gaming revenue in 2014, and year-over-year comps will begin to get easier starting in March. 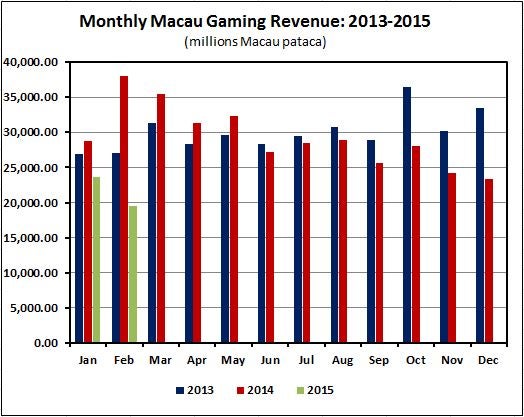 The End Of The Bad News Barrage?

Macau has seen a seemingly constant stream of bad news over the past year. Last year, the Chinese government announced a crackdown on corruption in Macau. Increased government scrutiny coupled with a weakening Chinese economy led to a major falloff in VIP gamblers.

In addition, recent talks of expanding the partial smoking ban instituted in Macau casinos in October and capping the number of visitors allowed to Macau from mainland China have increased pressure on stocks.

The Benefit Of Low Expectations

Expectations seem to be extremely low for Macau moving forward. Even the 48.6 percent decline in February revenue beat consensus expectations of a 53.6 percent drop.