I recently discussed the effect the extremely cold winter has had on natural gas prices. If a picture is worth a thousand words, a chart is worth ten thousand words to a trader: 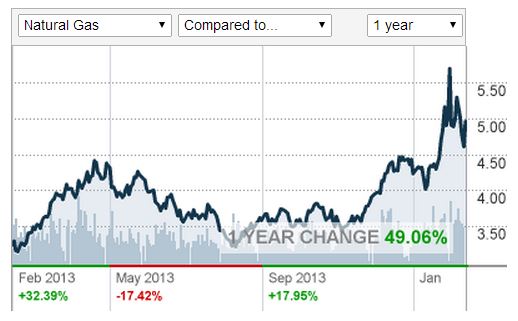 There has been a highly contested debate in the energy world over the past few years about whether natural gas will end up being a “bridge fuel” that will fill the gap during our inevitable conversion from oil to electricity or other clean energy sources.  Some people have visions of all gasoline fueling stations being replaced by liquid natural gas stations, many of which already exist. Others believe that natural gas is not a viable solution to our energy needs because, like gasoline, is is a limited resource that is only slightly “greener” than gasoline.

My personal opinion on the issue falls somewhere in the middle of the two extremes. As the United States continues to wean itself off of its Middle Eastern oil dependency, domestic natural gas will certainly play a role in our future. How large of a role it will play is hard to say. What is not hard to predict is how much Linn Energy (LINE) will pay me in dividends in the upcoming years! The market can go up or down, but LINE’s current yield is about 9%. As the share price of Enerplus (ERF) has risen over the past year, I have been steadily selling ERF and buying LINE. Aside from the fact that LINE’s fundamentals are better than  ERF’s (forward P/E of 22 vs 31) and it pays a higher dividend than ERF’s (5% vs 9%), the fact that LINE is an American company means I don’t have to pay the foreign withholding tax on its dividend. Finally, an oil/natural gas company such as LINE provides some much-needed diversification to my financial-heavy portfolio.